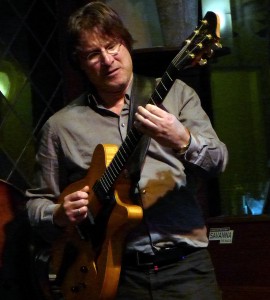 “Wim Bronnenberg made a big impression. With his semi-acoustic sound he chooses to play such refined and lyrical stuff, with such musical intelligence that his long solos never fail to grab the listeners attention.” (De Volkskrant)

“Pianist Marc Copland searched to bring out the introspective beauty of the compositions resulting in flat and tensionless drills. Some hours later, on the SJU Jazzpodium Michiel Borstlap and guitarist Wim Bronnenberg showed the audience hors concours an alternative way to play standards. Swinging and sounding unpretentious, the quartet played music bursting with joy. (JAZZ)

CD STREAM “What a relief to hear a jazz guitar player whose sound is not the equivalent of a paintbrush-painting. Edgy chops and runs in which every note can be heard clearly showcase his roots in blues and rock. That does not alter the fact that he can also make his instrument sing exuberantly and clearly or murmur introspectively… A name to remember” (NRC Handelsblad)

“I was immediately struck by the singing qualities of his lines, the innate good taste and clarity of his solos, and the feeling that every note was meant” (Frank van Herk)

CONNECTED “I LOVE your new CD! Your guitar playing-acoustic and electric are outstanding, but I expected that. I remember hearing you years ago in Utrecht. What really impressed me is your writing-your compositions. That was a delightful surprise. Also the playing of all the others in your group. Congratulations Wim-and keep it up! “ (Jim Hall)

“The music is very well conceived and the sound of the group is very nice. Congratulations!” (Enrico Pieranunzi)

“Secretly one of the best ****. For years now Wim Bronnenberg is secretly one of the best jazz guitarists in the Netherlands. And yet this is only the second CD under his name. The compositions are the result of years of writing and it shows. Like the pieces of Wayne Shorter the pretty melodies follow their capricious turns through the chords, with surprising curves. Bronnenberg’s playing, his warm, full tone and the ability to remain fascinating and evocative in prolonged solo’s is but one of the charms of this lovely yet spirited record, next to the very graceful contributions of reeds player John Ruocco and pianist Harmen Fraanje.” (De Volkskrant)

”An extraordinary CD that’ s a good way to describe “Connected” of Dutch jazz guitarist Wim Bronnenberg. The music combines the world of modal jazz and regions in which more room is being given to original, free interpretations. The latter is taken care off by the other soloist on this CD, John Ruocco on tenor saxophone and clarinet. Regularly he breaks open Bronnenberg’s straight-ahead jazz guitar tradition – by all means positively mentioned here. This causes beautiful contrasts and lifts the music to a high level. Bringing styles together as is done here shows musicianship and understanding.” (Brabants Dagblad)

“CD of the month (April 2006, Dutch national radio) (…) The diversity of Bronnenberg’s pieces is striking. His choice of notes and well-contemplated guitar sound are absolutely brilliant. Catchy themes (Hidden Agenda) and a tingling ballad (Angel Falls), on acoustic guitar for a change, lift this admirable production to an international level. In the last mentioned piece clarinetist John Ruocco presents himself with a trademark humor inflicted chromatic run. It’s the intro of his tasteful solo. On the tenor saxophone Ruocco displays an equally personal sound, as he has been doing for many years now. All contributions, including those of pianist Harmen Fraanje, bassist Uli Glaszmann and drummer Hans van Oosterhout, provide the listener with non-stop joy.” (Jazzflits)

“Bronnenberg likes to be challenged by distant notes, twisting and turning them into flexible garlands, generating music that is logical and surprising at the same time. His improvised melodies on the guitar sometimes have a lasting quality.“ (BN De Stem)

“Like Jesse van Ruller and Martijn van Iterson, Bronnenberg definitely deserves a place on the list of Dutch top guitar players.  With his open, relaxed way of playing and adventurous interpretations of his very personal and highly interesting compositions, he’s somewhat in a class of his own. His sound is full and warm and his lyrical improvisations catch the attention of the listener. Combined with the warm sonority of John Ruocco’s tenor saxophone a full group sound is created, that seems to accentuate the strength of the compositions even more.  Ruocco’s soloing showed great mastery in his displaying of graceful modern lines over the mostly modal, melodic themes. He has a unique sound. Not all that powerful but with great warmth and sonority. Somewhat reminiscent of Paul Gonsalves…  ” (Draai om je oren)

“Seldomly in Jazz at the Crow a similar high level was reached. Wim Bronnenberg, musical director and composer, proved to be an authentic guitarist with few references to guitar icons or existing schools. Attacking the strings confidently with clear and fresh melodic ideas, he further developed his compositions in perfect, accessible improvisations and so did the other musicians. Even though the tunes sometimes lasted longer than twenty minutes, the audience kept wanting more. John Ruocco was in a superb shape. Insiders already knew what this friendly American Dutchman has in store, but were nevertheless surprised by the authority and imaginativeness in his playing. In the ballad “Angel Falls” he made clear to all why he’s considered one of the finest clarinetists in the world. Harmen Fraanje never sounded better to me! He was obviously enjoying himself in this company. Heavenly and breath taking was his soloing in “Connected”, bridging jazz and classical piano together. Drummer Hans van Oosterhout’s playing was bubbling with surprises. Bassist Uli Glaszmann had an equally important role on the final result.“ (Draai om je oren)