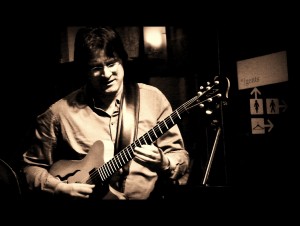 In 1991 Pat Metheny came to The Hague to teach at the Royal Conservatory for a whole week. During the final concert Wim had the honour and pleasure to play together with Pat and to perform one of his very first pieces: “Time of the Gypsies”. This tune would later appear on “Stream”, Wim’s first album as a leader.

Wim’s first international exposure came during a coast-to-coast tour in Canada with the Dick de Graaf Septet. The band travelled through many European countries doing club gigs and playing at festivals like Jazz Leverkusen, Imatra Finland and the North Sea Jazz.

“Goose pimples? Absolutely, but mainly because of the guitar playing of Bronnenberg.” (De Stentor)

In 2000 together with Italian pianist Alessandro di Liberto, bassist Anton Drukker, drummer Joost Lijbaart and vocalist Anne Thomas, Wim recorded the first CD under his own name, called “Stream”. The album consisted of original material mainly. The North Sea Jazz Festival invited the band (with Kris Goessens now at the piano) to play.

“A name to remember.” (NRC Handelsblad)

“… convincing all the way.” (Twentse Courant)

The second CD as a leader was called  “Connected”. It featured a new band (John Ruocco, Harmen Fraanje, Uli Glaszmann and Hans van Oosterhout) and challenging new repertoire. The band played the Bimhuis (with Tilmar Junius at the piano and Marcel Serierse behind the drums), the North Sea Jazz Festival and many more.

“I LOVE your new CD! Your guitar playing-acoustic and electric are outstanding, but I expected that. I remember hearing you years ago in Utrecht. What really impressed me is your writing-your compositions. That was a delightful surprise. Also the playing of all the others in your group. Congratulations Wim-and keep it up!”  Jim Hall 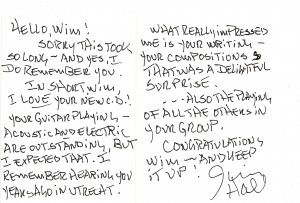 Secretly one of the best **** “Bronnenberg’s playing, his warm, full tone and the ability to remain fascinating and evocative in prolonged solos is but one of the charms of this lovely yet spirited record…” (De Volkskrant)

“…Wim Bronnenberg on guitar made a big impression…” (De Volkskrant)

“His improvised lines don’t merely sound like embellishments. With a blissful expression he composes melodies that at times have a lasting quality.“ (BN De Stem

Wim Bronnenberg Quintes peaks during Jazz at The Crow “Seldomly in Jazz at the Crow a similar high level was reached.” (Draai om je oren)

With vocalist Anne Chris Wim has recorded two albums. Her band played at the North Sea Jazz Festival; as a double bill act Anne and Wim performed in a series of concerts organized by the Jazz Impuls Foundation (amongst other venues at the Concertgebouw with Tom Beek on sax, Cord Heineking double bass and Marcel Serierse behind the drums). Also Anne Chris and Wim have appeared as a duo, playing at the Rijkmuseum Nachtwachtzaal amongst other venues.

REVIEWS ABOUT ANNE CHRIS & WIM AS A DUO

“Anne Chris played in a small setting … normally she performs with a seven piece band, but guitarist Bronnenberg took away any impression they were needed.” (Het Parool)

In 2011 Wim was part of a band backing Mike Boddé; his show “Pil” toured in Holland (a.o. Kleine Komedie).

Wim has toured in Germany, Austria and Switzerland with musical show “The Cotton Club”. He was a band member in Mike Boddé’s theater production “Pil”.

Wim has appeared on recordings with: